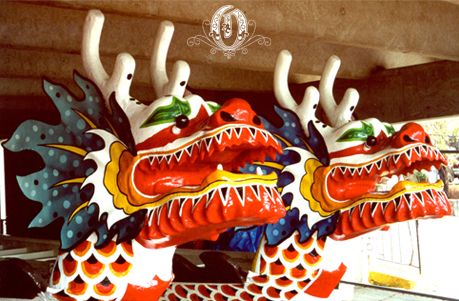 Several years ago I was commissioned by the Portland-Kaohsiung Sister City Association to custom paint the complex blends on those big, beautiful ears. The only time the boats were not being used and available for me to custom paint, was in the cold of early March. There were four different color-blend schemes that needed to be mixed and applied to the boats.

The eight Taiwan-style dragon boats were stored in the parking garage under a restaurant west of Portland, Oregon. At first, it was like custom painting with oatmeal because the paint was so cold and lumpy. But I managed to heat the area and materials until blending was possible. There were several incredible volunteers there with me and they were assigned to repaint the scales. Suddenly the Scotts Mills earthquake occurred while I was painting on the last set of ears! As the dragon boat began swaying back and forth, I thought the volunteers were playing a joke on me! (Those blends were challenging enough with all of the color breaks and polka dots that had to fall in exactly the same place – without them moving the boat on me). We all moved out from under the restaurant when we realized we were in the middle of an earthquake. We held our breath as the quake continued and we stood there helplessly watching those beautiful boats bounce around. After everything settled back down, we returned to our work and looked over each boat carefully. Luckily there were no damages.

The cherry on top was being invited to ride in one of the boats during the Rose Festival Starlight Parade in downtown Portland. My two girls were thrilled! I put aside my shyness and my girls and I had fun practicing our ‘parade hand-waves’. It was a magical evening for my little family. Our gratitude goes out to Roberta Weinstein for helping to make it all happen.